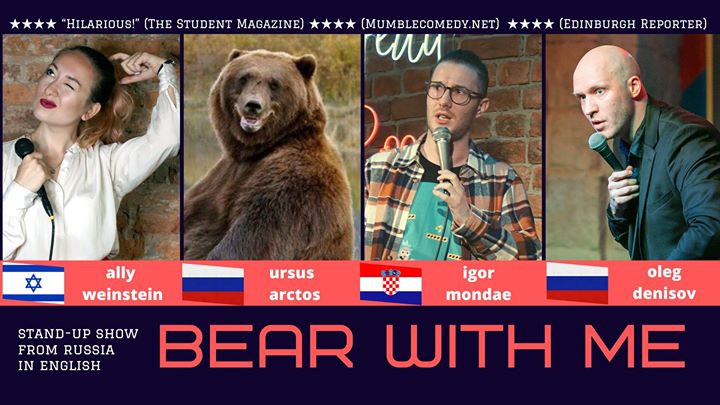 Stand-up special in English presented by a diverse trio of experienced international comedians from Israel, Croatia and Russia.

A Jew, Croatian and Russian come into a Moscow stand-up club … this isn’t the beginning of a joke, but of many! This colorful threesome has gathered to present you a very non-typical Russian show, where they talk about relationships, politics and the mysterious “Russian soul” — no topic is off the table! “Bear with me” is brought to you by a diverse bunch of experienced and cosmopolitan comics: a Moscow-born former TV writer and current alternative comedy veteran; a Croatian traveler, who became one of the pioneers of English stand-up in Moscow; and a Jewish girl who returned to the Motherland after 10 years in Europe to develop Saint-Petersburg comedy scene. You will hear three completely different, yet ultimately hilarious perspectives, and are sure to find the one (or three) that fits your taste 😉

Oleg Denisov is a philosophy-trained weirdo, who jokes about politics, culture, and penguins having sex. He is a satirical comedian based in Moscow and one of Russia’s most experienced international stand-ups. A self-described “absurdo-satirist”, Oleg is a seasoned international performer with three full solo runs at Edinburgh Fringe Festival, and several solo European tours, including a 40-date tour of his critically-acclaimed show "Russian Troll".

★★★★ “A well-honed act, leaving the audience relaxed and hungry for the next killer line, the next exuberant punchline” (Mumble Comedy)

“Don’t remember when I laughed this hard” (Turku News, Finland)

Igor Mondae: originally from Croatia, Igor has been stationed in Russia for the past 7 years. As a comedian, he is active for 5 years; performing, hosting and organizing shows in more than 30 venues in downtown Moscow, as well as 4 other Russian cities, including Punchline Comedy Festival and StandUp Fest SPB 2k19. In addition, Igor performed abroad in 16 cities across 11 countries; Latvia, Poland, Czechia, Slovakia, Germany, Austria, Hungary, Croatia, Slovenia, Serbia, and Georgia.

Ally Weinstein: Jews and comedy writing are basically synonyms at this point. Especially, since performing on stage is much cheaper than therapy. Al Weinstein - is a fast-talking, boobs lacking, Jewish comedienne and you will enjoy laughing at her expense while being exposed to the reality of an unmarried girl in her late 20s. However, those are not all of her accomplishments. She is the main host and founder of ‘St. Pete’s Comedy Cabinet’, featuring comedians from all around the world. She also graced the stage as a featured artist and participant of ‘StandUp Fest SPB 2k19’, toured Russia and Europe and is ready to take more cities by storm.

Disclaimer: no bears were harmed in the creation of this show.